What is SMT Surface Mount Technology?

It was not until the 1980's that surface mount technology, SMT became widely used. Once SMT started to be used, the change from conventional leaded components to surface mount devices, SMDs took place quickly in view of the enormous gains that could be made using SMT. 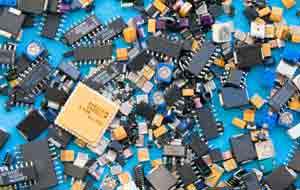 Mass produced electronic circuit boards need to be manufactured in a highly mechanised manner to ensure the lowest cost of manufacture. The traditional leaded electronic components do not lend themselves to this approach. Although some mechanisation was possible, component leads needed to be pre-formed. Also when the leads were inserted into boards automatically problems were often encountered as wires would often not fit properly slowing production rates considerably.

It was reasoned that the wires that had traditionally been used for connections were not actually needed for printed circuit board construction. Rather than having leads placed through holes, the components could be soldered onto pads on the board instead. This also saved creating the lead holes in the boards which added cost to the production of the bare PCBs.

Typical SMT board with transistors, and passive components

As the components were mounted on the surface of the board, rather than having connections that went through holes in the board, the new technology was called surface mount technology or SMT and the devices used were surface mount devices, SMDs. The idea for SMT was adopted very quickly because it enabled greater levels of mechanisation to be used, and it considerably saved on manufacturing costs.

To accommodate surface mount technology, SMT, a completely new set of components was needed. New SMT outlines were required, and often the same components, e.g. ICs were sold in both traditional leaded packages and SMT packages. Despite this, the gains of using SMT proved to be so large that it was adopted very quickly. 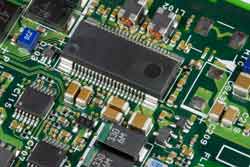 SMT board with typical IC packages

What are SMT components?

Surface mount devices, SMDs by their nature are very different to the traditional leaded components. They can be split into a number of categories:

SMT is used almost exclusively for the manufacture of electronic circuit boards these days. They are smaller, often offer a better level of performance and they can be used with automated pick and place machine that in many cases all bit eliminate the need for manual intervention in the assembly process.

Wired components were always difficult to place automatically because the wires needed to be pre-formed to fit the relevant hole spacing, and even then they were prone to problems with placement.

Although many connectors and some other components still require assisted placement, printed circuit boards are normally developed to reduce this to an absolute minimum, even to the extent of altering the design to use components that can be placed automatically. In addition to this, component manufacturers have developed some specialised surface mount versions of components that enable virtually complete automated assembly for most boards.