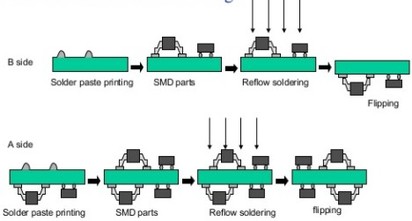 Most surface mount components will be held in place by the surface tension of the liquid solder alone when run through the re-flow oven inverted. The weight limit of the parts that can be processed on the underside during reflow is related to the pad area. This is approximately 30g per square inch of pad area before the component will actually drop.

Above is a picture detailing one method for populating a two sided surface mount PCB. We covered using a stencil to apply solder paste for a PCB a few weeks ago. In the comments there was a debate about the virtue of using stencils as well as a question about how two sided boards are populated. This was a good question because reflowing a board twice can cause components on the underside to fall off.
comment mentions that there are a couple of methods for two sided population. In the video you will see that a stencil is not being used, but instead, paste is applied by a pedal actuated syringe. The paste is applied to the underside of the board first, then a teeny dot of epoxy is added to hold the component in place. Each part is then positioned normally and baked in a reflow oven. This process both reflows the solder, and cures the epoxy. When the board is reflowed a second time, the epoxy holds the bottom components in place as the top solder reaches its melting point.
This method of applying solder paste is slower than using a stencil. But if done correctly, every component can get the amount of solder needed.