History of SMT is rooted in the technology of Flat Packs (FP) and hybrids of 1950s and 1960s. But for all practical purposes, today’s SMT can be considered 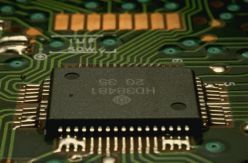 to be a continually evolving technology. Currently the use of Fine Pitch, Ultra Fine Pitch (UFP) and Ball Grid Arrays (BGAs) are becoming even more common.

Even the next level of packaging technologies such as Chip-on-Board (COB), Tape-Automated Bonding (TAB), and Flip Chip Technologies are gainin