As with many thermal processes, soldering fumes, aerosols and solid particles (residues) that must be removed from the process cycle are also produced when soldering electronic assemblies. FLASON SMT Reflow Oven Thermal Systems has established effective residue management for reflow convection soldering with the R seriels. The continuous development in cooperation with customers as well as the experience gained with more than 1,000 installed systems proves that, by means of thermal pyrolysis, the process gas is reliably cleaned and the time spent on maintenance is reduced.

Without an effective residue deposition system, the concentration of the volatile organic compounds in the process gas atmosphere would steadily increase, which would entail a great potential for contamination as well as intensive maintenance and repair expenses. For many years now, FLASON SMT Reflow Oven Thermal Systems has been equipped with two proven residue management systems: pyrolysis in the pre-heating zone, and cold condensation and filtration in the cooling section. This means that all aggregate states of the residues – gaseous, liquid, crystalline and particulate – are removed from the process gas in an effective and energy-saving way.

“Our pyrolysis technology not only scores through its excellent cleaning performance. The heat energy generated for the cracking is subsequently fed back to the process circuit, so this solution is not only clean, but also efficient and sustainable. In addition, with an annual granulate change the pyrolysis is almost maintenance-free, which significantly reduces the downtime in production – an enormously important aspect for every electronics manufacturer,” says Dr. Andy, Head of Development and Technology at FLASON SMT.

Is the chemistry right?

As early as 2003, FLASON, in cooperation with the renowned research institute ILK Dresden, started the initial investigations into the chemical composition of the soldering fumes and their efficient deposition. The results of this work show that the soldering fumes consist of a large number of chemical compounds that are not only composed of the substances of the electronic assemblies but are also formed by chemical reactions during soldering. The operating temperatures, residence times and granule types of the pyrolysis which were subsequently researched led to the realisation that the maximum temperature was particularly responsible for effective deposition of the residues. This operating temperature can also be reduced through the use of catalysts, such as specified granules. However, an excellent matching of the catalyst material to the soldering composition that is to be deposited is necessary for this purpose. Even small amounts of interfering elements, such as unknown components of the solder fume through a different type of conductor plate, can seriously interfere with the catalytic process. Based on the results of the chemical soldering fume composition, which varies greatly depending on the type of solder paste, component and conductor plate, not the catalytic process but rather the thermal pyrolysis with semi-active granules was further developed as a robust and reliable deposition process.

Diehl Controls is using the FLASON pyrolysis technology successfully. “Experience shows that the expenses for cleaning and maintenance were significantly reduced due to the much lower level of contamination. The pyrolysis no longer produces liquid residue, and the residuals accumulate in the granules and can be disposed of in an environmentally friendly manner. Thanks to effective residue management, the environmental impact is significantly lower, since the pollutants are bound and are not released into the discharged air,” explains Herbert Ehinger, Production Manager at Diehl Controls in Wangen in the Allgäu region of Germany.

With R10 and R10+, the residue management functions by means of a combination of pyrolysis in the inlet and peak area as well as the cold condensation in the cooling section. In the case of pyrolysis, long-chain molecular compounds in the soldering fumes are broken (cracked) into short-chain molecules by means of thermal fission through heating (450 – 900 °C). After cracking, they are small enough to be deposited in the granules and removed from the process. 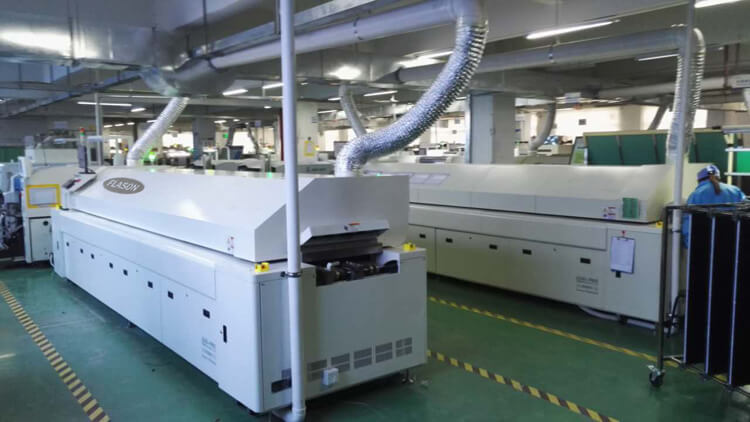 R10+ systems in the production hall

The principle of cold condensation has also proven itself in the reflow soldering technology for process gas purification. It is used in all systems of the R series – in addition to pyrolysis technology, such as in the case of the R10, or the complete residue management of the R10+. This deposition principle is particularly energy-neutral in the area of the cooling path. The process gas is passed through a two- or three-stage cooler filter system so that the residues can condense at the cooler and particles and droplets settle in the filter. The purified gas is then fed back into the process.

Schematic representation of the R10 with pyrolysis in the infeed area