When we talk about PCB assembly cost, numerous factors come into our mind like labour costs, technology used, packaging of the parts, quantity of the boards, turn time, number of fine pitched parts used etc. When most of the above mentioned factors remain the same irrespective of the region, labour costs vary from region to region. Therefore to achieve a cost effective PCB assembly various factors need to be taken into consideration.


Labour Costs – Like mentioned before that labour costs depends on the region where the boards are being assembled because assembly does not only include the automated process but also requires human interaction. So if the labour is cheap then total cost will definitely be cheaper. For example, a board assembled in North America will be 3 to 4 times more expensive compared to one assembled in Asia because of the availability of cheap and skilled labour. Though the labour costs in Asia have seen a drastic increase over the past decade but overall cost still remains cheaper.

Let us see the price comparison of a simple 2 layer board assembled in North America and China.

Following is the table representing the different packages used to calculate the above mentioned assembly cost: 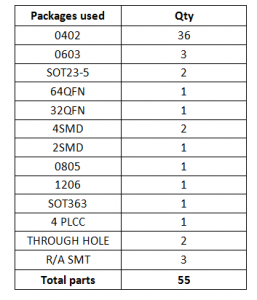 But this reduced cost comes with some additional challenges like shipping costs, communication delays due to time zone differences which in turn increase the turn time thereby increasing the cost by approximately 10 to 20%.

Turnaround time – Assembly cost may vary with the turnaround time also. Shorter assembly times may increase the cost by more than 30%-200% compared to the normal assembly times. For an expedited assembly sometimes the manufacturer may have to hold the existing orders and concentrate on the expedited order, expedited shipping also costs higher and in some cases the manufacturing location may also need to be compromised to meet the deadline thereby increasing the assembly cost considerably in some cases.

Quantity of boards to be assembled – The assembly pricing can be quite deceiving when in smaller quantities. The total assembly cost for prototype boards may seem much less when compared to the total cost of boards when manufactured in larger quantities. But one thing that people fail to notice is that the unit price of assembly drops down to a very large extent when produced in large quantities. Many factors add up to the cost for the assembly like initial setup, stencil, and programming. Therefore in case of prototype boards this cost will be much significant but in case of larger quantities this cost becomes insignificant as they are a one-time cost and need not to be reproduced again and again.

Technology used – Another important factor that plays an important role in the assembly cost is the type of technology used either through-hole technology or surface mount technology (SMT) or sometimes both. While SMT is cheaper because of low initial cost of setup because of high degree of automation and higher component density but sometimes it is unavoidable to have all surface mount devices (SMDs) on a board. At this point through hole technology comes into action. Thus we see a rise in the cost as it requires additional drilling of the boards and reduction in the routing area.

To summarize, PCB assembly cost depends on labour cost, stencil, turnaround time, quantity of assembled boards required and the packaging of the parts used. Sometimes programming of the board is also required but Bittele doesn’t charge any programming fees.